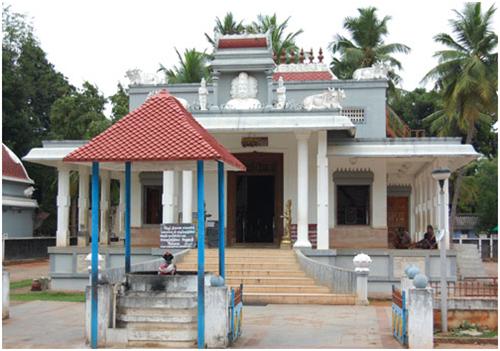 Neyveli is a cosmopolitan city with people from all religions living in that small township. There are temples for Lord Krishna, Lord, Ayappa, Lord Murugan, Lord Nataraja  in Neyveli. Of these, the Nataraja temple is well known for the metal statue of Lord Shiva as Nataraja, which is the biggest statue in the world. The temple is believed to find its place in the Guinness Book of Records as its height is 10 feet 1 inch with a base of 8 feet 4 inch and a weight of 2,420 kilograms. There is an idol of Godess Sivakami measuring 7 feet in height and 750 kilograms in weight.

It is said that Saint Manickavasagar sang his eminent Tiruvasagam in Chidambaram and this song is written on the hands by Lord Shiva himself in the disguise of a devotee. After this, he signed it stating “written to the transcription of Manickavasagam” as Azhagia Tiru Chittrambalam Udayan. The Godess Sivakami is known by the name Osai Kodutha Nayaki and she is celebrated for giving the voice and thala to the dance of Lord Shiva graced by devotees.

Nataraja idol in the temple is said to be sculpted in harmony with the rules that are laid in Bogar 4000 text with various herbals and Panchaloka (five metals). The entrance features Lord Shiva carrying out his three activities – creating, sustaining and destroying. For a difference, the temple features Saint Tirumoolar at the feet of Nataraja instead of Saint Manickavasagar. The two sages namely Patanjali and Vyakrapada can be seen sitting next to Lord Shiva.

Once again, going against the tradition, the Lord Nataraja temple in Neyveli has Sun and Bhairava before the Lord Shiva instead of Sun and Moon. Bhairava has 10 hands and carries the name Dasabuja Bhairava and there is a separate shrine for Sani Baghwan.

Though the temple existed since almost 500 years dating back to history, the Poomi Pooja for the building was done in 1986 and the wax work commenced in the same year. The completion of the temple construction took place in 1987 followed by the holy consecration.


Greatness of Nataraja Temple in Neyveli

Usually in Shiva temples there will be 63 Nayanmars collectively in a row while in the Nataraja temple in Neyveli the shrines are placed separately. The devotees choose to worship the saint corresponding to their birth star in order to meet their desires.

The temple has the idols of Lord Ganesha, Lord Chandrasekhara, Godess Parvathi and Saints Manickavasagar and Sekkizhar, celebrated for his creation – the Tiruthondar Puranam praising the glory of the Nayanmars. To the west of Lord Nataraja’s shrine is the shrine for Sempon Jyothi Nathar.

In adherence to the ancient practice of Manu Needhi, there is a prayer box used by devotees to write their miseries in a paper and put it in and ring the bell thrice. These petitions will be collected by the Dikshit while carrying out the morning pooja and are read it in front of the Lord Shiva secretly and burnt in fire. After realizing their wishes, devotees write a thanksgiving letter and drop it into the box.


Pooja in Nataraja Temple in Neyveli

The Nataraja temple in Neyveli is open for devotees from 6:00 AM to 12:00 PM and again from 4:00 PM to 9:00 PM. There are different poojas such as Thirupalliyezhuchi Pooja, Kala santhi Pooja, Uchikala Pooja, Sayaratchai Pooja, Irandam Kala Pooja and Arthajama Pooja that are carried out in this temple. Even special poojas are performed with demonstration on the Guru Pooja days of Nayanmars and is followed by a talk on their lives.

This temple of Tamil Nadu is administered by the Panniru Tirumurai Valarchi Kazhagam, but Naalvar Narpani Mandram is the one that serves the devotees. They conduct an assembly prayer every Monday at 5.30 PM and offer Prasad to the sick people who come to the temple.